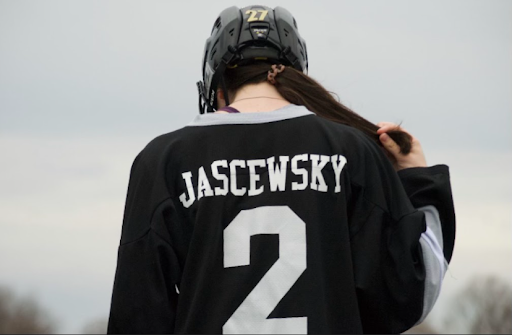 Lauren Jascewsky is the only girl on the 24-player Howard County Wolves hockey team.

D’Asia Dendy is the only girl on the Wilde Lake wrestling team.

Coach Chantal Ridlon is the only female football coach at Wilde Lake.

Lauren, D’Asia, and Coach Ridlon are some of Wilde Lake’s female athletes in male-dominated sports.

Lauren can still recall her first hockey practice with an all-male team. She remembers someone coming up to her and saying, “Just to let you know, hockey is a very physical sport.” Lauren is on three hockey teams — Washington Pride AAA, the Wolves, and the Howard County MSHL (Maryland Student Hockey League) Girls.

D’Asia, a member of the 113 weight class, has been on the Wilde Lake wrestling team for over a year. “I really wanted to do a sport that made me proud of myself and worked me hard,” she said.

Although Coach Ridlon says she has never had an issue being respected by her players and fellow coaches, she has encountered some disrespect and instances of being underestimated by other teams. “I’ve been mistaken for an athletic trainer, some sort of team assistant or manager, and it’s often not assumed by other teams that I am a coach, even if I’m wearing something that says ‘Coach’ on it,” she said.

D’Asia says she has a competitive mentality for wrestling. “I always try to work harder than my opponents, and as long as I believe I got it, I do,” she said.

”The hardest part is being accepted,” Lauren said. “I feel like there’s just a lot of tension with being physical on the ice. People think girls can’t be as physical, but that’s not the case. We can be just as physical. We push and shove a lot.”

D’Asia says she is underestimated “almost all the time.”

“When I step on the mat, if it’s not another girl, then a dude would take it easy or rough handle me because they don’t want to lose to a girl,” D’Asia said.

On the field, Coach Ridlon is considered a young coach. “I think people are usually surprised about my knowledge of the game, considering how in comparison to other coaches, how new I am to the game itself,” she said.

Despite these sports’ mainly male demographics, Lauren, D’Asia, and Coach Ridlon say they are starting to see their teams, coaches, and spectators grow with the times, leaving behind the long-held belief that girl athletes are inherently lesser than their male counterparts.

“It’s becoming more common in the news that females are coaching, so it’s slowly becoming more normal,” Coach Ridlon said. “I’m starting to get a ‘Good game, Coach’ from other teams.”