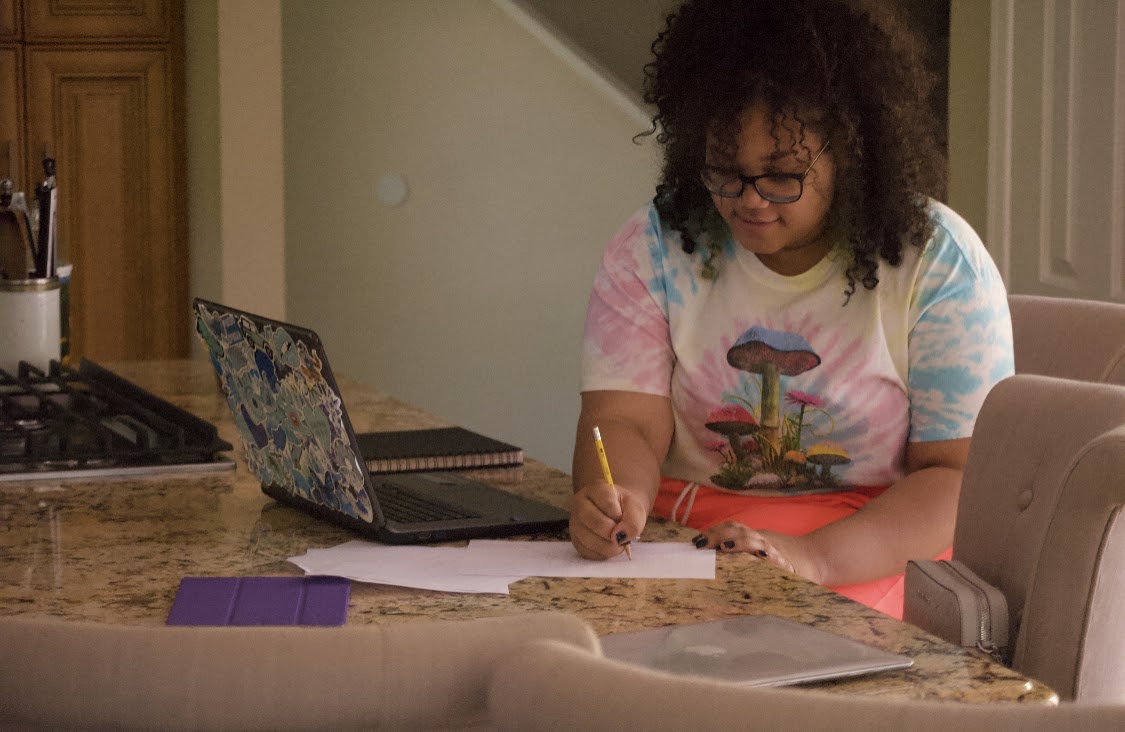 When online school started in April of 2020, sophomore Kaia Roberson says she was doing the bare minimum because of the pass or fail system. As the year progressed, turning in work got harder, she says. Kaia largely attributes her dip in motivation to being distanced from her classmates, teachers, and friends.

“When I lost those interactions, I lost the environment of school itself,” says Kaia. “One of my favorite parts of school was seeing my friends every day. When that was taken away, it felt like school wasn’t really school and just completing assignments.”

Over a year after everyone was sent home, hybrid school was set to begin. Junior Leah Williams was relieved for the chance to get out of online learning. She came back to brick-and-mortar school after months of frustration. “The enjoyable parts of school had been lost,” she says.

“School was more than just going to class and learning,” says sophomore Payton Roberts. By March of 2020, Payton was finishing her first Wilde Lake theater production, passing all of her classes, and looking to do sports. “Now that we’re virtual, it’s just going to class and doing work. Wake up, go to class, go to sleep. You’re in your house doing the same thing every day. It got boring fast.”

Payton was three quarters into her freshman year when everyone was sent home. “Mostly, I think I got a freshman year,” she says. “But this year’s freshman got nothing but a whole lot of computer time.”

Freshman Laurel Sands experienced her first year of high school on her computer before switching to hybrid in hopes of finding lost motivation and experiencing something of a freshman year.

Kaia says this year was especially hard for students who rely on other students rather than their teachers for help. She says not being near her peers and able to ask questions stunted her academic performance.

“Now, being back in hybrid, you’re able to ask someone other than the teacher for help if you don’t understand,” she says. According to Kaia, when she was all virtual and did not understand an assignment, she would not do it, making her fall behind.

Payton says that the avoidance of her assignments is not from a lack of understanding but instead not caring. “I just don’t feel like doing my work,” she says. “I got comfortable with not caring about due dates.”

Laurel said that she, too, began to neglect doing assignments. “About once a quarter, I just stop doing work,” she says. “That wouldn’t be allowed in regular school.”

English teacher Ms. Sheinhorn has observed her students’ motivation plummeting. She says that the class average is down, and an increasing number of students are not turning work in.

When Kaia returned to hybrid, she said she regained a sense of normalcy, which motivated her to work again.

But regaining that sense of normalcy is not possible for fully virtual students, says Payton. What was meant to be a viable substitute for face-to-face work — breakout rooms — have fallen short, she says. “Breakout rooms don’t do much. You’re talking to a profile picture, not a person,” she says. “Interactions happen so naturally at in-person school. In school, you learn people’s names and faces. You talk to them. You form friendships. In virtual school, it’s a silent profile picture.”

As the school year comes to a close, Payton is looking to the next year. “I’m excited to see actual human beings again. I want to go back,” she says. “But for now, I’m ready for summer.”