The Paw Print • May 12, 2022 • https://wlhspawprint.com/6751/spotlight/teaching-tolerance-is-not-political-indoctrination/

Teaching Tolerance Is Not Political Indoctrination 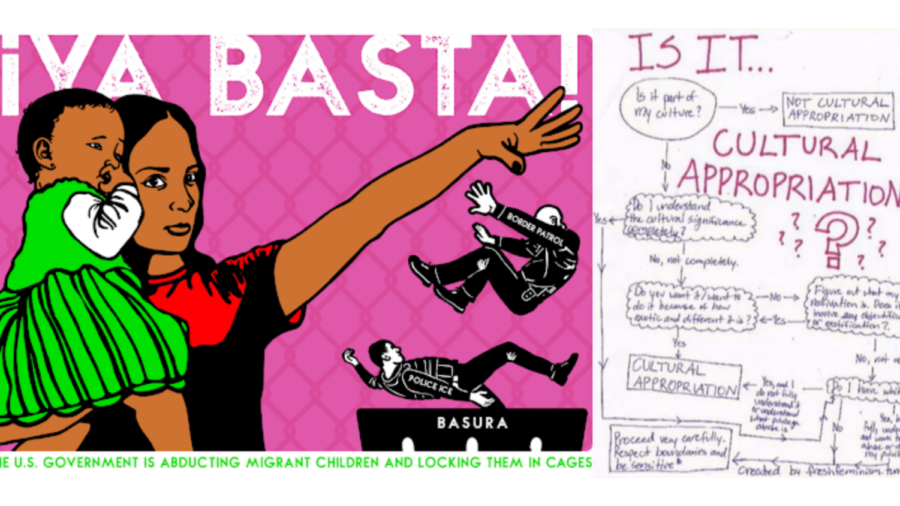 The two images Mr. Shaw displayed at his second testimony.

On February 10, for the second time this school year, Wilde Lake Health teacher Mr. Shaw testified to the Howard County Board of Education on “accountability and political indoctrination” in Howard County schools.

He condemned two teachers’ lessons in that testimony, which he represented with two images: a flowchart on cultural appropriation and an editorial cartoon about anti-immigration policies.

Before showing the first image, Mr. Shaw said, “A warning to parents, what you’re about to see is heavy, and it’s really tough to see.”

The image was part of a broader lesson for Act Two of “A Raisin in the Sun,” which includes complex themes like cultural assimilation and diffusion. The flowchart shows a series of questions, starting with “Is it part of my culture?” These questions lead the viewer to a verdict on whether their actions could be considered cultural appropriation.

The second image, part of a larger collection displayed during a Spanish class, shows a mother holding her child and dropping men labeled as “Police ICE” and “Border Patrol” into the trash behind “¡YA BASTA!” which translates to “Enough is Enough.”

This editorial cartoon was shown as an example of artists expressing their beliefs as a segment of a lesson to practice grammar. The slide deck featured many images, all of which were social justice-themed.

As a student of Wilde Lake High School who has had one of the teachers under fire whose lesson was unfairly displayed for the County to see, I have never felt politically indoctrinated. I have always appreciated lessons that taught me tolerance because not only do I apply that knowledge to interactions daily, but I wouldn’t have gotten that education anywhere else.

Mr. Shaw would have us believe students are being force-fed a political ideology. But that’s not true. We can be exposed to controversial topics and have varied discussions — even contentious ones — without being converted to that point of view.

When I read “A Raisin in the Sun” in my ninth grade English class, it was the first time I remember hearing terms like “cultural assimilation,” “cultural diffusion,” and “cultural appropriation.” My teacher encouraged the class to think critically about the story and apply that perspective to our reality in a nation where many cultures have blended. I was taught how to respect and appreciate other cultures. I did not learn this in any other class, and those lessons have proved invaluable.

The vision that Columbia was founded on stresses tolerance and understanding. To uphold those values, we must create an environment where students feel accepted. As shown in the graphic, Wilde Lake is a diverse school that fulfills city designer Jim Rouse’s vision for Columbia: “A garden for the growing of people.”

At a school like Wilde Lake, in my opinion, this is very important. When you are in a setting where people come from all walks of life, you have to be tolerant, knowledgeable, and compassionate to maintain a healthy environment.

What we learn can not be reduced to two graphics. My teachers aren’t afraid to cover controversial, touchy topics, and I am a better person for it.

We can’t ignore the conflicts in our world. These issues don’t disappear when we are in class, and ignoring our differences would be damaging to students.