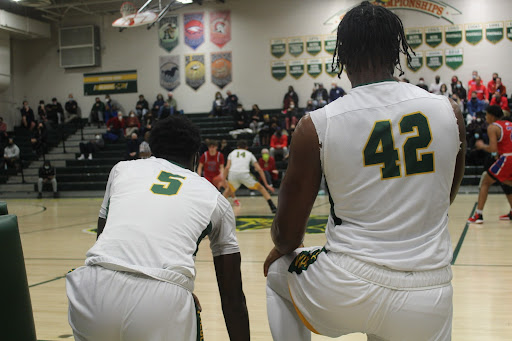 For team captain Enosh Minney, this season was filled with trials and tribulations. With a 9-7 record, the team booked a winning season, but fell short in their first playoff game in a heartbreaking loss against Long Reach.

From the start, the season wasn’t typical. “Playing the first game and then the season getting postponed was a big challenge for all of us, but we managed,” said Chris Martin, a JV player.

But as soon as extracurriculars restarted, the team headed back to the court to officially begin their season.

Once back in the game, Wilde Lake showed their strong passing game as a team on Monday, January 24 when they beat River Hill by 14 at home.

Against River Hill, Wilde Lake led at halftime 28-22. With an extra step in their passing attack in the second half and better ball distribution, they were able to seize a decisive victory over their rivals winning 65-51.

Coach Wingfield attributed the win to a “great defensive gameplan,” as Wilde Lake stopped River Hill from scoring on key possessions, and made game changing steals. In the 4th quarter, River Hill got into foul trouble, which put Wilde Lake at the charity stripe, where they were able to extend the lead.

With less than 41 seconds left in the game, senior Enosh Minney got the ball, made a quick move, dropped the defender, and then found junior Nathan Hiteshew in the corner for the three, putting them out of reach at 65-51.

The rest of the season had its ups and downs, but Wilde Lake finished 5-5 in the last 10 games.

In their second game against Centennial, Wilde Lake put up an offensive explosion, scoring 76 points in a winning game.

Wilde Lake continued the success with another blowout win over Mt. Hebron. In this game, the scoreboard didn’t show the full story. Up by 10 plus points in every quarter, they dominated the whole game.

Sophomore Kain Corkeron believes much of their team’s success should be attributed to their coach. “Coach Wingfield always knows how to connect with us and knows what is best. We have full trust in him,” said Corkeron. “He knows our strengths and weaknesses as players and as a team.”

Wilde Lake finished strong at the end of the regular season. But in their first playoff game, they fell four points short.

Still, Wilde Lake still has some of the best stats in the county. Shooting Guard Nathan Hiteshew averaged 15.9 points per game, and the 6’4 Forward Kain Corkeron dominated with an average of 17.0 points per game.

In the playoffs, Wilde Lake was set to play Long Reach away. Stands were packed on both sides of the game and it was heating up to be a good match up.

“It was an intense, hard fought game.” said Andrew Lazzor, the head coach of Long Reach varsity basketball . “We definitely had a game plan for Nate Hiteshew. He can really shoot the ball as well as create scoring opportunities for his teammates. He is a great player and we tried everything to slow him down.”

Both teams started the game off slow, but Wilde Lake turned the heat up in the second quarter.

By the end of the third quarter, Wilde Lake was up by 14 points, but the game was far from over.

At the end of the third quarter, Wilde Lake had to fill a gap made by Corkeron, who fouled out. Shortly afterwards, Hiteshew suffered an ankle injury that took him out of the game.

That’s when Long Reach took advantage and cut the lead to win the game 63-59. After a  combination of key mistakes and unluckiness at the end of the game, Wilde Lake’s fate was sealed.

“It was the most exciting high school game I have seen in a long time,” said Coach Lazzor

After an unprecedented season, Hiteshew says he values the team’s progress. “We got better in each game but we ended in disappointment,” he said. “We all just need to work and look forward to next year.”