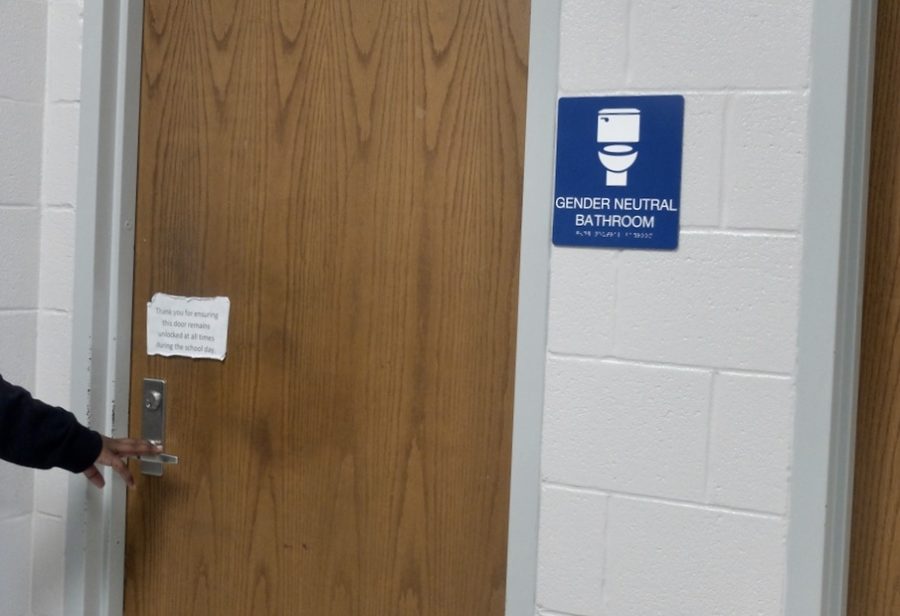 Many students rely on the privacy of gender-neutral bathrooms.

In November, Ms. Leonard made an announcement to the school, reinforcing the intent of the bathrooms, saying “Students should respect the space of the gender-neutral bathrooms to keep them as the safe environment they were made to be.”

There have still been reports from students expressing the misuse of the space.  “It is disappointing to know that students are using the bathrooms for the purpose they aren’t intended for,” Ms. Leonard said.

Salem McDaniel, a sophomore, say they the gender-neutral bathrooms as regularly as they can, but some students’ poor behavior have discouraged them from using it. “A lot of people use it to smoke, and the smell makes me dizzy,” they said. “They also use them to skip class.”

Salem says it is “upsetting” to see how people “misuse the bathroom.”

“I’m a transgender man myself, but the men’s bathrooms are socially unavailable, to the point of being dangerous to me,” Salem said, “But then people who make [men’s bathrooms] unsafe are making it so my only alternative option is taken away, and it hurts.”

Samuel says that these misuses are, “just taking a good thing and making it a bad thing.”

Assistant principal Ms. Riley says students share the responsibility of maintaining the bathroom’s intended safe environment. “It’s a matter of students actually using the bathrooms respectfully, rather than abusing the privacy of them,” she said. “If it were to continue, however, we would need to take action to punish the students who disobey the student code of conduct.”

Salem says that they, along with other students, need the bathrooms. “All of the misuses have to stop. This accommodation is important to so many people who can’t afford to get it taken away for other people’s misconduct.”