“To Kill a Mockingbird” from the Perspective of a Black Student 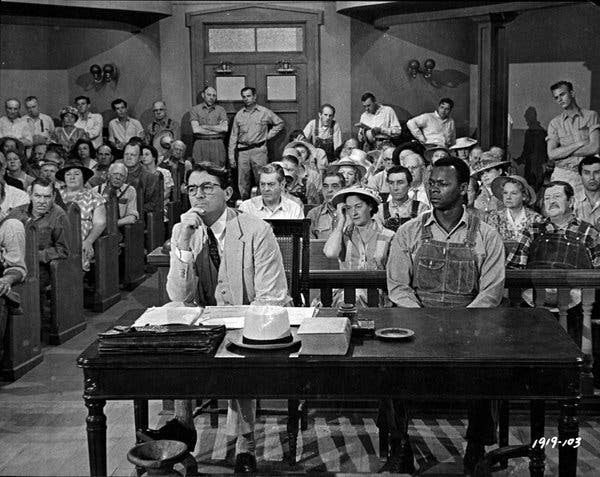 To Kill a Mockingbird, published in 1960 by Harper Lee, is the story of a little white girl in Alabama named Scout Finch who comes of age in a small town called Maycomb. The story, told by her, is about the lessons she learns about racism as she watches her lawyer father try and fail to defend a black man who is falsely accused of raping a white girl.

In the story, her father, Atticus, an honorable man and one of the greatest lawyers in the state, takes on this near-impossible case: Tom Robinson, a handicapped Black man, vs. The Ewells, a white family. Bob Ewell, the father of the Ewell family, accuses Tom of raping his daughter, Mayella.

With Tom being Black, a racist justice system, and the fact they are in the deep south when racism was in its prime, taking the case is like washing your car while it’s raining; there is no point.

Knowing the difficulty of this case, Atticus tries to defend Tom but loses the case because of a corrupt system.

Although it’s been taught for six decades, the book doesn’t sit right with me as a Black person. I read the book in the ninth grade. I understood everything, did well on the mini-tests and any other projects that came with it. But with the resurgence of the Black Lives Matter movement in the spring of 2020, I began to question how I viewed the book.

I’ve most definitely matured since then. In the 9th grade, I saw To Kill A Mockingbird as an assignment, but now I see its message as a social issue. I was seeing this through the lens of a white kid who wasn’t directly affected; she was like a pedestrian. I had to be in the driver’s seat.

Changing perspectives showed me how Black people were portrayed unfairly in the book.

A handicapped man was accused of something he couldn’t have done, like if his left hand isn’t usable, how does he use the unusable hand to commit the crime? How he and his family had to live with a false rape allegation. His kids will be burdened by their father being a convicted rapist. His wife lost her husband. The justice system, riddled with lethal prejudice, took away his future because of his race. Tom was doomed from the start; no one could’ve saved him. And he was helpless to save or even defend himself.

The book displays Black people as handicapped, helpless, and voiceless when we’re the complete opposite. Throughout history, Black people have been fearless, passionate, united, and in control of their destinies, and overall, that’s the Black experience: Strength and unity.

In this book, Harper Lee doesn’t even try to show its full potential. Unity was shown in the book, with Tom’s church showing up to his trial as emotional support, but those people sit in silence and watch as someone unjustly loses his future. They leave without a singular ounce of resistance. Unity is speaking out until you get the justice you deserve.  Look at the Black Lives Matter movement, for example.

In modern society, I don’t see how this book is helping us to move forward. This book has been taught for six decades. As times change, the curriculum must change with it. There are better books that are just waiting for their chance to shine.

Look at the 145th Street book of short stories. It defines what Black people are all about. Themes like community (“Big Joe’s Funeral”), strength and mental fortitude (“Monkeyman”), and love (“Kitty and Mack”) are included. The best part? It’s written by Walter Dean Myers, a Black man. He knows what the Black experience is like, which makes his writing honest and authentic. This would be perfect for our modern and more accepting curriculum.

To Kill a Mockingbird is not only inaccurate; it’s harmful to Black teens who are already self-conscious about their race. It’s basically telling them they aren’t capable of doing anything on their own when they are very capable of anything they put their mind to. Instead of putting down our 47.4% Black student body, we should be lifting our Black students with literature.