A Season That’s Not About Winning 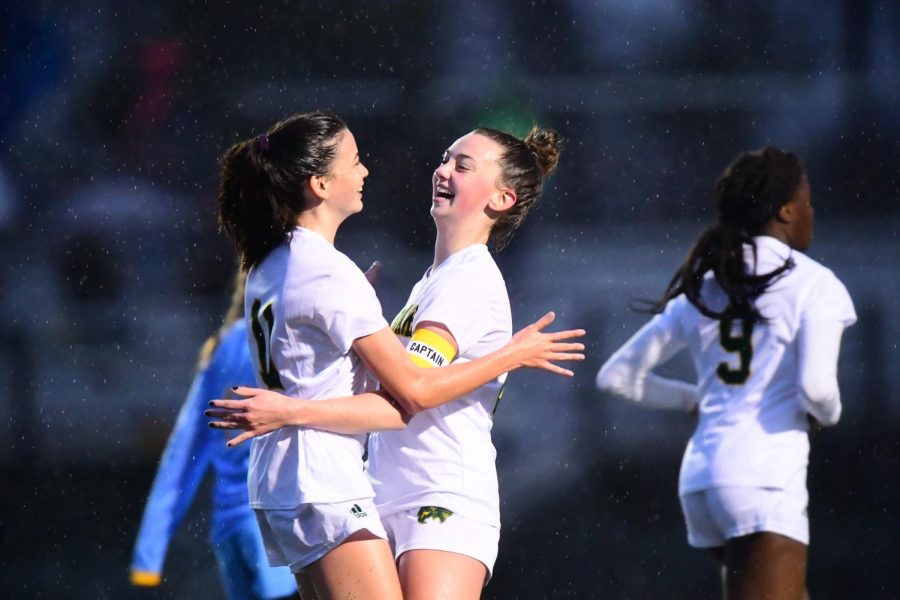 When players returned to the fields for the 2020-2021 soccer season after a year of uncertainty, they spent every second possible having fun and appreciating the opportunity to play. Never sure whether they’d be able to see the season through to its end, both the boys and girls soccer teams were focused on making memories while they could.

With the boys’ team winning the state championship and the girls’ winning the county last year, the future of Wilde Lake soccer was looking bright. When the pandemic hit in March, everything changed. Limited gatherings and stay-at-home orders canceled sports across the country. The idea of a 2020-2021 season was still up in the air. Juniors didn’t know if they were going to have their senior season. On February 5, 2021, it was announced that fall sports would resume with a shortened season in the spring.

The announcement was a relief to many players. There were still questions about what the season was going to look like and which COVID protocols would be put in place, as well as mixed feelings among coaches and players.

Trevor Shea, the coach of the Wilde Lake boys varsity soccer team, was a little hesitant to come back at first. “I was a little worried, for sure. But at the end of the day I’m happy that we were able to get out there and play,” says Coach Shea.

Shea Nesbitt, a sophomore at Wilde Lake and two-year varsity boys soccer player, had a different feeling when he heard that they were going to play. “I was thrilled because playing high school soccer is something I always look forward to, and missing even a year would be disappointing.”

Unlike past seasons this one wasn’t about winning. According to Coach Shea, “The nature of this season was more developmental.” He explains that due to COVID-19 and injuries there were a limited number of players, and that this past season was a way to allow the new players to gain experience and develop the team as a whole rather than as individuals.

This year consisted of ten guaranteed games for each team as well as a county championship for the top two leading schools. This resulted in a few rematches. Most notably for Wilde Lake boys were the two games against Oakland Mills.

The first time the boys faced off against Oakland Mills earlier this year, they were shut out 0-5. Going into this first game there were a lot of unknowns for the team. Coach Shea says, “We weren’t really sure how to handle their long throw-ins, which were a big part of their game.”

Although they weren’t able to do anything about the long throw-ins for the first game, having that second game allowed them to prepare. “We worked on defending those throw-ins in the practices leading up to the game. Although we didn’t get the results we wanted, working and developing the defense really made an impact,” says Coach Shea.

While they lost 0-2, Coach Shea notes that the team showed marked improvement in their rematch.

According to Coach Shea, this season also allowed them to develop young and new players. He says, “The guaranteed ten games really helped to get those newer players on the field and get some experience.” He also explains how the older and more experienced players on the team, like Tyriq Umrani and Liam Nesbitt, really helped show the rest of the team traditions and routines.

With many COVID protocols like wearing masks, social distancing on the sideline, and a limited number of spectators, players had to adapt to the new normal of playing through the pandemic and find ways to make this season count.

Aicha Wilson, a senior captain for Wilde Lake girls varsity soccer says, “It is definitely a bit harder to find that drive to compete than usual because there’s no huge incentive like going to states, but we all still wanted to play for each other, and for many of us it was our last high school season so we wanted to just have fun.”

This unusual season allowed members of the team to learn and grow not just as players, but as people as well. “I think myself and all of my other teammates and coaches learned that you have to be ready for the unexpected,” says Aicha. “Not only do you only have to expect it, but you have to be prepared to make changes and try things that are otherwise out-of-the-box to make things work.”

“This was a season that we will all remember.”