Taking a Stand for Equality 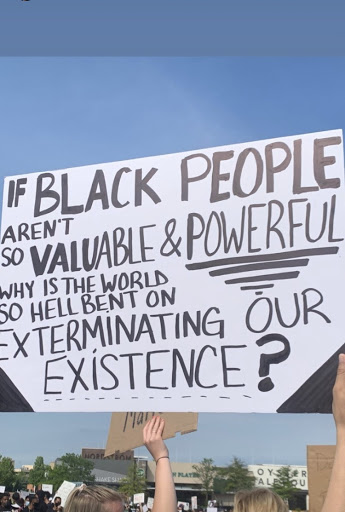 On May 25, an innocent 46 year-old black man named George Floyd died tragically in Minneapolis, Minnesota due to a combination of excessive police force and an impending heart attack. His death, along with the deaths of many other people of color from unnecessary police harassment has sparked a fire in the black community. Many have taken to the streets to protest, riot, and stand up for the equality they have deserved for innumerable years.

Racism and police brutality have been an immense problem in the black community for an extremely long time. Countless lives have been lost simply because of the color of someone’s skin. As protests and riots have arisen globally, many people from differentiating backgrounds, races, and ethnicities have decided to stand up and point out the issues in America’s justice system.

Kai Burton, a 21 year-old resident of Philadelphia, PA has an adoration for the Black Lives Matter Movement, and is relieved to finally be seeing representation of herself and her struggles. She says, “Having a younger black brother in today’s society is definitely a struggle because I have constant anxiety about him being out. I want to keep treating him like he’s twelve when he’s really about to turn eighteen, and I can’t protect him like I used to. I know he has the skills to protect himself, but sometimes I’m afraid he’s a little too fearless.”

Leonard Hughes, a sheriff at Essex County Sheriff’s Department in Newark, New Jersey  says, “I’m a father of two sons, and I worry about them constantly. I make sure to talk to them about everything to make sure that they are aware of the stigmas surrounding people with our skin color. I feel horrible about everything going on, like I’m trapped in two places.”

However, with nation-wide rioting and protests, people from all walks of life are finally starting to get the message. “I’m a little scared,” says Hughes, “… but I’m also proud of what they are doing. I’m proud of the movement, and I’m proud to be who I am.” Though there is always more work to be done, progress is finally starting to be made.