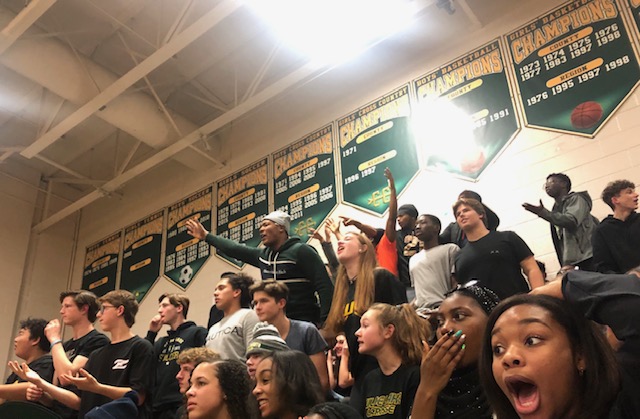 The student section is seen reacting to a missed shot from a Wilde Lake Player at a home game vs Centennial. The Cats unfortunately fell short on January 15th with a score of 57-51.

As students line up outside of the auditorium to purchase their tickets to the Friday Night Basketball Game, they anticipate a showdown. They expect the Cats to give their all as they fill the stands with excitement. From the moment the game begins to the very last minute, the fans can be heard cheering on their team and booing the opponents. This is the atmosphere of the Wilde Lake community held in one place, captivated in one moment.

In his freshman year, senior Justin Martin and his friend group started the tradition of coming to every home game they could to support the program.“I love basketball. You‘ll always find me in the front row commentating the games and yelling at bad calls” says Martin. “Each game I know I’m definitely in for a show whether the team wins or loses.”

A typical Friday night game includes students pictured in unison getting frustrated with referees, chanting “airball, airball” after an opponent misses their shot, and jumping up and down when a player scores a three-pointer.

“The games give me the perfect opportunity to express my wild personality,” says Junior Lucas Michel. “It’s fun to be able to come together with my friends and scream on top of my lungs for one of the best basketball teams in the county. They’re worth me losing my voice over,” Mitchel says with a laugh.

Junior Ella Tsunami credits the strong support system and welcoming atmosphere the student body provides to one another. “I think one of the most important things that is hidden is how inclusive we all become once we step into that gym as a fan, player, coach, or parent,” Tsunami says. “As a fan, we know the players depend on us to fuel their energy and I think we can all take pride in that.”

Although the games bring a sense of community to the fans, the fans themselves are encouraging to the players, who appreciate their presence and find them endlessly supportive. “This is my final year here and even though the faces in the stands have changed, the number of people coming out hasn’t,” says Senior Kwanku Boampong, who plays center for the Wilde Lake basketball team. “It means a lot when people come out and support us and believe in us to make a name for Wilde Lake. It definitely helps our energy on the court and it makes the hype of the game ten times more fun.”

With a month left in the season, the Wilde Lake community is anxiously awaiting another tremendous season. Fans and players alike are hoping that the hard work and talent of the team can carry them to states and give them a good playoff run. However, senior point guard Stanley Lowe acknowledges the fact that the key to all of this lies within the fans. “We need the support of our student section there with us all along the way,” he says.