Ms. Nichols’ Childhood Shapes Her Perspective of What a Teacher Should Be 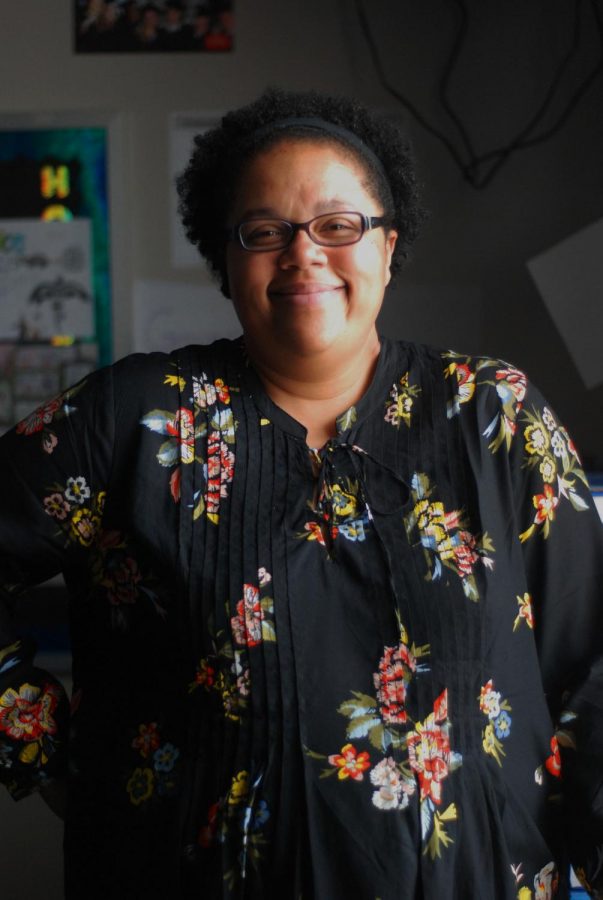 In the fall of 1984, in Keene, Texas, Jessica Nichols attended her first day of fourth grade.  Smiling from ear to ear, she skipped into her new classroom with an optimistic attitude, looking forward to yet another year of school.

Keene was a tiny town in Johnson County, the kind of town you might read about in an old novel. It was a mannerly place, where each member of the town knew one another. It was where neighbors relied on neighbors in times of hardship. However, Keene has its problems too. Like the church where polite racism was the order of the day.  If you were Black or Latino in Keene, you were forced onto the balcony during service.

“Every Saturday, I was ushered upstairs regardless of how empty the main floor was at the time. And if you asked to sit downstairs, you were politely told that the downstairs was full even if that wasn’t the case,” Nichols remembered.

And the Klan, the KKK, was a constant unseen presence in the small town.

On hotter days, the town was lively with children playing and running through the streets. But the true character of Keene made an appearance when the weather turned rainy. You could always tell whose dad was a member of the KKK by what happened when it rained – homes that weren’t in the KKK would open their doors and invite you inside to wait out the storm.  However, if someone was a member of the KKK, they would tell you to ‘get on home’.

“I didn’t understand why some of my friends’ parents would let me come inside to play while others would say to get on home until I was in the 4th grade,” she said.

Her fourth grade year started just like any other.  Students were excited to meet their teacher and to show off all of the brand new clothes they picked up while going back to school shopping.

“I was super excited about being in my 4th grade teacher’s class because she was the first lady of our church. So I whispered my excitement to my best friend Heather, and she looked at me with sadness and whispered that she didn’t think the teacher would like me,” Nichols said.

“I was confused. Everyone liked me. Teachers, parents, friends and even Old Man Johnson liked me. So I asked her why,” she said. “She whispered that our teacher was ‘one of those people…the kind that will send you home in the rain.’  I asked why people did that and she said that they were in the KKK, and our new teacher was their leader’s wife.”

“She refused to call me by my name that year, she would call me by the N-word instead. She was so wrapped up in hate and I was too little to understand that,” she said. “I felt dehumanized by her but I knew in that moment that my name meant something to me.”

She not only hurt Nichols’ self-esteem that year, but also destroyed her perfect record. She made a habit of marking things wrong that weren’t, which made her grades plummet. She won a poetry contest at her school and got a C in the poetry unit in class.

Her teacher spent the next year demoralizing and humiliating Nichols on a daily basis. Her grades turned from As to Cs, and her once bubbly, cheerful personality turned into something altogether unrecognizable.

“That was when I started to become a really angry person, an angry bully,” she said. “And I hated school because of it.”

That year marked the beginning of her journey throughout grade school, which left her navigating prejudice, self doubt, and the confusion that is so heavily tied with childhood and adolescence.

“I basically gave up on the whole idea of school after that,” she said.

She spent that summer dreading the impending school year. So she entered 5th grade with dismal expectations of the year to come, and on her first day, she was met with something else entirely.

Ms. Dudding, “like pudding with a D,” floated into the classroom on a “fluffy cloud.” Her first order of business was meeting all of her new students. Being that she was an enthusiastic first year teacher, she went around the room greeting each student individually. When she arrived at Nichols’ desk, she was met with crossed arms and a frown. Nichols countered all of Ms. Dudding’s attempts at conversation with short answers and annoyance.

Weeks had passed, and Nichols continued to meet her teacher’s greetings with glares filled with mistrust. Ms. Dudding, determined to remedy the situation, asked if Nichols would stay after school to help her with a project. Nichols reluctantly agreed, and when the bell rung at the end of the day, she stayed at her desk.

Ms. Dudding asked her to stay after school the next day, and then the next. Nichols ended up spending all of her afternoons in Ms. Dudding’s classroom that year. During the first week, she started smiling again: And by the second, she started to laugh.

“If I hadn’t had Ms. Dudding, I probably would have been suspended or expelled my 5th grade year,” she said.

Nichols finished 5th grade with straight As and an unequivocally positive attitude towards school.

Just as things started to look up, her life unexpectedly took a turn for the worse. She was uprooted from her small hometown of Keene, Texas, and was moved to the large city of Washington, D.C.. The move left her feeling lonely and miserable.

In the span of one year, she had lost all of her friends and found herself feeling alienated in a foreign place. She became angry again: Angry because she was alone, but also angry because she no longer had the same opportunities and programs in school which she had so recently become accustomed to.

Her new school did not have a Gifted and Talented Program. There were more students in classrooms and less teachers to teach them. It gave the first impression of a prison instead of a school.

Throughout middle school, her teachers punished her for being an angry kid instead of asking her why she was angry. Her math teacher threw her out of class with a frequency that never allowed her to actually learn math; Her English teacher would send her to the school’s pastor because she “knew” Nichols was “going to hell,” and her Science teacher would scream at her in front of her classmates.

This constant indignation created even stronger feelings of anger and hopelessness towards school. However, a fateful encounter with her 8th grade Social Studies teacher would soon change this, beginning with one simple gesture.

Mr. Copiz was a small Eastern European man with a barrel chest and a heavy accent who had been teaching Geography and US History for many years. He saw that Nichols had lots of untapped potential, but he also saw that no one in her life was giving her the opportunity to grow.

One day, he asked Nichols to stay and talk with him after school. That afternoon, he handed her a book that changed everything: A shiny new copy of ‘The Bluest Eye’ by Toni Morrison. He had found that the one thing Nichols’ shined at in school was reading, so Mr. Copiz spent the next year filling her life with books.

With each book he gifted her, her confidence blossomed. And that year, she learned so much more than what the contents of those books had to offer.

“To be finally seen as someone who isn’t just a problem when everybody else sees you as a problem, is really powerful,” she said. “ I finally felt like I meant something to someone and that I belonged.”

Her  middle school celebrated the close of the year with an 8th grade graduation ceremony. Students were given the usual awards that celebrated achievements in science, athletics, and math. Nichols sat, unexpecting in the back of the auditorium, unaware that Mr. Copiz was about to give her one final gift.

He stood on the stage behind a podium and announced that the school was presenting a new award this year: The reading award. It was dedicated to a student who didn’t just read the most books, but also fully understood them, someone who devoured and loved the written word. He then announced to a group of shocked faces that this award went to Jessica Nichols.

She excitingly dashed onto the stage and accepted a small golden statue with a bookworm and an apple on it.

“I literally had an out-of-body experience. I couldn’t believe he said my name and that I got an award,” she said. “It meant everything to me… I felt like he saw me, and he saw who I was, and what I was passionate about, and what I loved.”

From 8th grade, she took away many things. Not only had she accumulated an extensive personal library at home, she had built up the confidence to do well in school, and in life. So when the time came to make a career choice, she knew exactly what she wanted to be: A Social Studies teacher.

And the first person she called was, the now retired, Mr. Copiz.

“He had told me in 8th grade ‘Let me demonstrate to you that you’re somebody worth it,’ and having that feeling that I was worth it to somebody inspired me to be a teacher that tries my best to see all my students,” she said. “Because that experience was life-giving to me.”