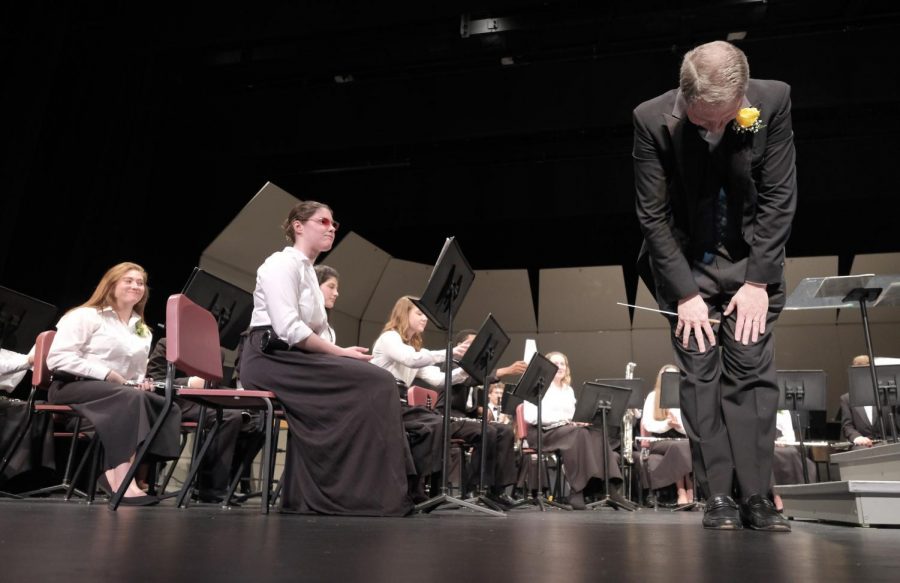 After 38 years at Wilde Lake, band director  Mr. Dutrow is retiring. Mr. Dutrow has educated young musicians for decades and has left a positive and lasting impact on the Wilde Lake community.

Mr. Dutrow was born  in Frederick, Maryland. Growing up, he lived with his sister, Rueyann, and parents, Norman and Margaret. From a young age, he was taught the importance of perseverance and hard work.

Mr. Dutrow’s roots in music were planted when he began to play trumpet in elementary school. His family was always around music, with his paternal grandmother playing piano at family gatherings, and his sister being a part of the marching majorette group.

In high school, he decided to take a musical theory class. He had the privilege of having an outstanding music teacher whom he looked up to, Mildred Trevvett, for having an abundance amount of love for her students.

Like many young students, Mr. Dutrow was unsure as to the academic path that he was going to take. Although he struggled with academics, he excelled in music, so he began considering this as the path for his future.

Being the first in his family to go to college, they had many doubts of success in music. Many of his family members thought it would be better if he stayed in his hometown and pursued woodworking like the rest of his family.

In 1975, Mr. Dutrow declared a Music Education major at the University of Maryland, College Park. He graduated with a 3.8 GPA, and was accepted into the academic honors society.

Shortly into his teaching position at Wilde Lake, he began dating his future wife Mrs. Elizabeth Dutrow. Their families had known each other for years, and would cross paths many times as they attended events.

A month after Mrs. Dutrow graduated from college, they got married. Students from his Jazz Band were included in the wedding reception, where the ten piece brass choir and a pipe organ performed. Incorporating the Wilde Lake Jazz Band was entertaining for the guests, but also meaningful to Mr. Dutrow.

After nineteen years of marriage, Mr. and Mrs. Dutrow had their daughter, Ava, who is now a sophomore in high school. She has inherited her father’s love and talent for music.

Ava and her father watch television together, usually Walker Texas Ranger, but of course they participate in musical events as well. Ava says that some of her best memories are at band functions with her dad, notably when they go to Jazz under the Stars at Glenelg.

Ava admires her father’s perseverance in his musical career, but most importantly his ability to be kind. One word that truly characterizes her father is humble. Mr. Dutrow’s humility is a trait admired by all.

“He’s the best at what he does,” says Ava. She feels incredibly proud of her dad while he is conducting on the stage, and is also taken away by how he can make the students sound beautiful after months of critiques and corrections.

Ava has had many opportunities to play with the bands her father has conducted, and for that she feels like the most privileged kid in the world.

Mrs. Dutrow knows the true impact of being a band director’s wife. At many times it’s exciting, and she always enjoyed being able to attend his concerts. But music at Wilde Lake also consumed much of his time and energy.

Many times Mr. Dutrow would be at the school working late hours, rehearsing with his various bands or doing school work. Mr. Dutrow also never got much of a summer break as the majority of his time was spent preparing the wind ensemble for marching band performances.

“The feel of those concerts and his reaction afterwards was priceless,” said Mrs. Dutrow.

While Mr. Dutrow’s father was alive, he would frequently attend his son’s concerts. He saw the success of his son as he would sit and tap his foot, realizing that Mr. Dutrow had “made it.”

After thirty-eight successful years of being the band director at Wilde Lake, he is retiring. Mrs. Dutrow describes the last time seeing her husband perform as bittersweet, realizing it would be the last time she ever saw him conduct his band.

Ava and Mrs. Dutrow are happy for him, and are excited to see what retired life will be for him. Elizabeth is looking forward to the two of them being able to garden, and is excited for him to mow and maintain their yard.

As for Ava, she has been waiting for her dad to make her a lamp out of a clarinet, something he has been meaning to do for a long time. The three of them will also, for the first time, take a vacation in the month of August.

The Wilde Lake school community will miss all that Mr. Dutrow brought to the school in his thirty eight years here.

Our community wishes him the best in retirement, but his presence will always be around — for no one loves Wilde Lake more than Lew Dutrow.