An Inside Look at Seussical the Musical 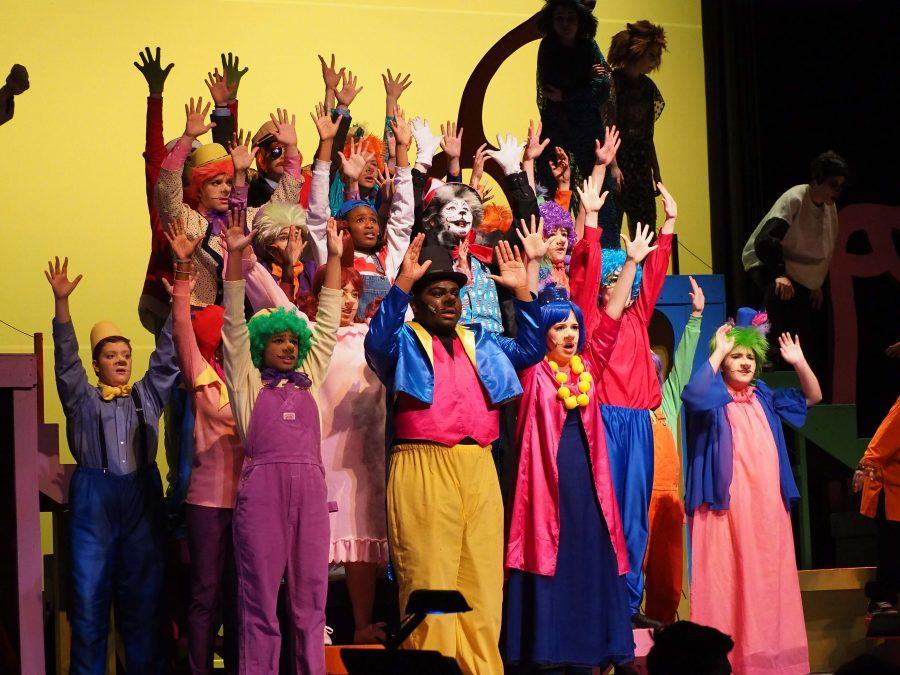 The scene backstage is almost as interesting as the scene out front.

After walking into the makeup room, you’re immediately surrounded by actors and makeup artists calling out, “can you hand me a brush?” and “where’s the eyeliner?” while rummaging through drawers and tops of tables.

The five artists slathered the makeup on each of the actors’ faces while more crowded around. A line of ten people began to form outside the door, each person waiting for his or her turn in the chair.

Head of makeup, junior Kate Loughlin transitioned the actors from human to jungle creature by painting and patting prosthetics to the actors’ faces.

Giraffes, cheetahs, monkeys, cats, tigers, and lions ambled around in various stages of character transformation; singing, dancing, and goofing around as laughter erupted through the room, breaking up the chatter.

Some, like freshman Zoe Reading, practiced singing through the prosthetics.

The two Cat in the Hats, Hayley Adler and Romeil Johnson, sat on one side of the room applying the thick clown-white base color to their faces with makeup sponges.

On one table, sat squares of tape designating sections for each character with their prosthetic, base, and sponge.

“Your Custom Face Design” posters were taped to the mirrors with instructions for each type of creature, used by the artist creating the masterpiece.

When Ms. Adler came in, all action froze while waiting for her reaction.

As time crept closer, the pace picked up with actors and artists alike flying around the room.

Once all actors had scampered to vocal and physical warm-ups, the makeup artists slumped into their seats, exhausted from the rush.

Then the curtain rises and the show begins.