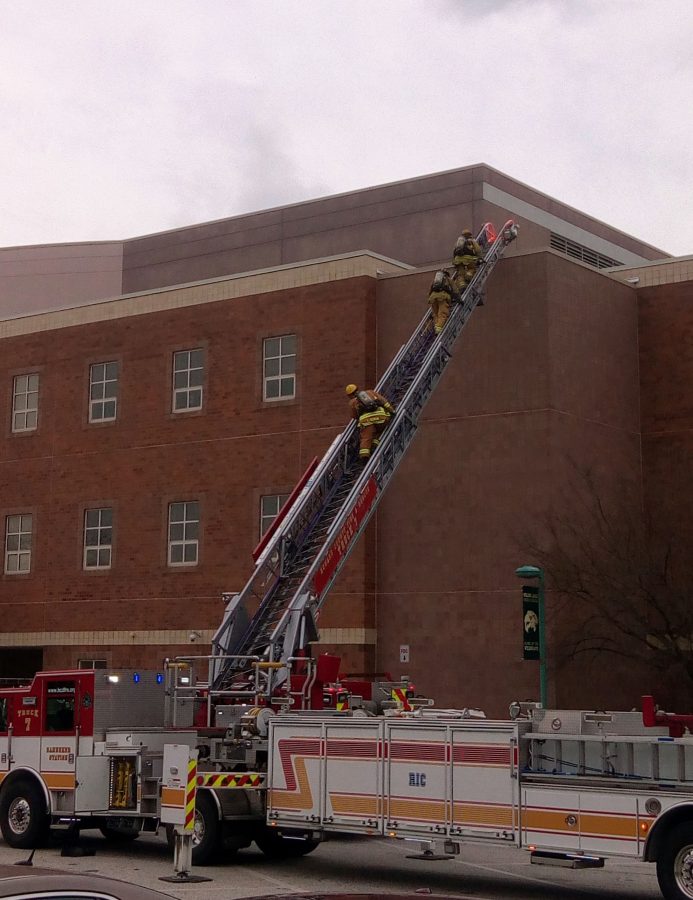 Students were forced to evacuate the building on February 15, 2017 at the end of first period due to another round of issues with the HVAC system.

At 8:15 am, the first two fire trucks arrived at the school while students milled about between the bus lanes and the Interfaith Center on the grass. The crowd of students shivered while huddled out in the freezing temperature.

By 8:16, students began to notice a steady stream of light smoke appearing from the top of the building, and firefighters extended a ladder to the roof. It remains to be seen whether the smoke was related to the incident or not.

At 8:17, three firefighters climbed the ladder, and arrived at the top. By this time, in addition to the two fire trucks, there was also one ambulance, nearer to the JRT, and two emergency vehicles that remained in the parking lot by the Interfaith Center.

The smoke stream began to slow down around 8:19 and by 8:20, the firefighters descended down the ladder. Although another, smaller ladder was brought out there was no need for it, and it was replaced at 8:22.

Minutes later, after administrators began to return into the building, the rest of the school followed after some confusion as to whether students were allowed to reenter.

When approached, firefighters refused to comment, but Principal LeMon came onto the announcements, citing that the reason for the evacuation was the “strong burning smell” coming from the HVAC system in the ceiling on the third floor.

This is the second evacuation this year related to issues with the HVAC system, which stands for heating, ventilation and air conditioning system. In the past four years, Mr. Crouse estimated there were at least 4 evacuations caused by odors from the HVAC.

According to an email sent by Wilde Lake an hour after the incident, the HVAC system was determined to have a malfunctioning motor. The email further explained that “the particular classroom HVAC unit was disconnected and the motor will be replaced.”