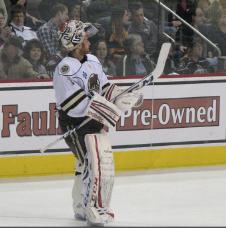 The National Hockey League season was saved when the league’s owners and players reached a Collective Bargaining Agreement (CBA) on January 6. The lockout came into effect on September 15 and resulted in the cancellation of 510 games.

The two sides were divided over issues concerning salaries and contract restrictions. The CBA determines trade rules, the amount of money individual teams can spend, and how the league’s revenues will be divided between owners and players.
The revenue split, the percentage of profit given to players, was a major stumbling block. The new agreement has lowered the players’ portion of the revenue from 57 percent to 50 percent.

Senior Yelena Malorodova believes that the players had the right to argue for more money considering the risk involved in playing professional hockey.
“They put their bodies on the line every practice, every game,” said Malorodova.
Not all fans agree, though, that players are the most important part in the NHL machine.

“The owners’ contributions might not be as visible as those of the players, but they organize the league and keep everything running smoothly,” said Senior Lauren Marshall. “They put in time and money. It’s not just the players risking everything for the sake of the game.”

However, the issues were not entirely fiscal. In the previous CBA, players could sign a contract for an unlimited number of years. The NHL owners proposed a limit of five years for the new agreement, but conceded to an eight year limit for free agents and a seven year limit for players re-signing with their previous teams.

Such a complex divide between the players and owners is not unprecedented. In previous years the two sides could not reach agreements, once during the 1994-1995 season and again during the 2004-2005 season. Both conflicts resulted in lockouts, the latter in the cancellation of the entire season.

Although the season will start within the next few weeks, its postponement had serious ramifications that extend past the players, owners and fans.

According to Malorodova, who has attended at least three Washington Capitals games every season for the last five years, “Before every game the restaurants surrounding the Verizon Center, [the Capitals’ home ice rank], were packed. They must be losing a lot of business, especially considering that NHL teams often have more than one game per week.”

Leagues other than the NHL were also affected by the lockout. NHL players have been playing in the American Hockey League (AHL) and Canadian and European leagues. Their contracts stipulate that they must now return to the NHL since a CBA has been reached.

Don Schneider, an usher for the AHL’s Hershey Bears for the last eight years, attests to the impact of the lockout on the AHL.

“Attendance has increased this season, but the stadium is never completely full. I do see a lot more Capitals’ jerseys this season than usual, though,” said Schneider.

In addition, Dave Hogue, a Pennsylvania resident and owner of Washington Capitals season tickets, believes that the lockout reflects poorly on the players’ and owners’ priorities.

“Hockey is in my family. It is something we could all agree on and enjoy together, which cannot be said for the players and owners, apparently,” said Hogue.

The new agreement has not resolved issue between the players and the owners. In previous years, the owners have been hesitant or completely unwilling to let the players play for their home countries during the Winter Olympics. This has been a major issue of contention that will once again come to a head before the 2014 Winter Olympics to be held in Sochi, Russia.