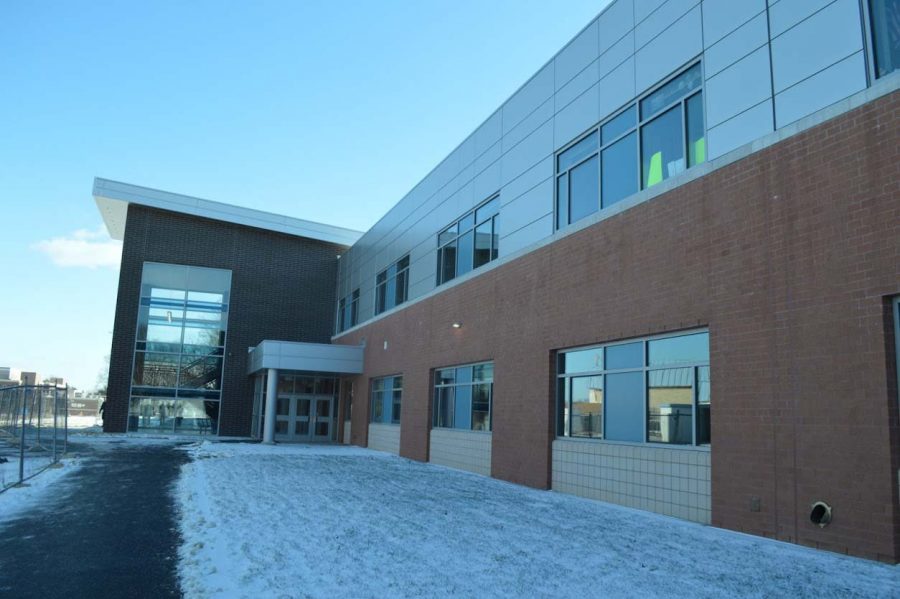 The new net-zero building has natural lighting that shines through large windows.

Wilde Lake Middle School held it’s grand opening for the newly built Net Zero building on January 8, the first one in Maryland, making it the most energy conscious school in the state.

The grand opening took place in the new, spacious gym that was lit with natural light that shined on the blue water themed walls.

The ceremony began with the Presentation of Colors by the Atholton High School JROTC and was followed by speeches from public figures such as Allan Kittleman, Dr. Renee A. Foose, Anne Swartz and other esteemed speakers.

Many Wilde Lake community members, alumni, past teachers and principals, and current students and staff filled the gym and watched as WLMS SGA President, Ashley Maharaj, cut the ribbon to officially open the school that’s been in construction since May 2015.

The sound of the young musicians in the Jazz Band and Orchestra filled the hallways with music as people explored the new building.

After the ceremony, current students and staff at WLMS gave tours to show off all the interesting features of the school. Some Net Zero energy features included natural light, an energy kiosk, and solar energy power.

A group of 7th and 8th graders, Katie Barren, Giana Johnson, Samantha Zione and Aboyia Karr were excited to talk about their new school and offered their opinions on the features that make the school better.

“I think that the outdoor classroom is really cool. I love hanging out there with my friends at recess,” said Zoine.

Johnson was just as excited to share what she likes about WLMS. “I really like the design of the school and it’s much brighter than the other building,” she said.

Barren shared how she loves the school but, she was concerned at first about the transition. “I was afraid that it would be hard to get to class but, it’s actually really easy and the classroom’s are closer together than the other school,” she said.

Though a transition in the middle of the school year is different from what most schools prefer to do, Principal Anne Swartz believes that the students and staff handled the move really well.

“I think the students and staff dealt with the transition well. Many students were really excited to see their new school,” said Swartz. “Some students were afraid that they weren’t going to be able to find their classes and their lockers at first but we [held] several tours to make them feel more comfortable,” she said.

The staff brought the students to the new building three times before Winter break. The students got to tour the school, practice class transitions, move things into their lockers, and visit their homerooms.

The school’s goal is to fulfill HCPSS commitment to environmental sustainability to support healthy learning environments. The school increased its capacity and can now accommodate approximately 760 students, 49 percent more students than the older school’s previous capacity.

Many students who attended WLMS in the past have shared several different emotions towards the new school and the destruction of their alma mater.

“I’m upset that they changed it after I graduated so, I won’t be able to experience the new school,” said Melanie Patterson who is a freshman at Wilde Lake. “I hope they made a new auditorium because they didn’t really have one before.”

While some students are upset, others are excited about how it is environmentally friendly.

“The new building looks big and has a good design,” said senior Alex Patterson, “The solar panels are environmentally friendly which is a step into the future and is good for the neighborhood,” she said.

Other WLMS Alumni remember the old WLMS and share that they’re glad it got a change.

“I won’t miss [the school] because it was time for a change and it was kind of dysfunctional. A lot of the rooms weren’t big enough, like the Band Room did not have enough space for a band of 60 people,” said junior Kareem Press.

Senior Jasmine Stevenson shares the same sentiment about the school not being big enough for all of the students.

“It was cramped and it was hard to get to class because the hallways always felt crowded but, in the new school, the classrooms are really open and the Gym, Media Center, and Cafeteria have improved a lot as well,” she said.

While older students reminisce on their middle school, Johnson is ready for the future. “I love the new school and I love going here,” she said.