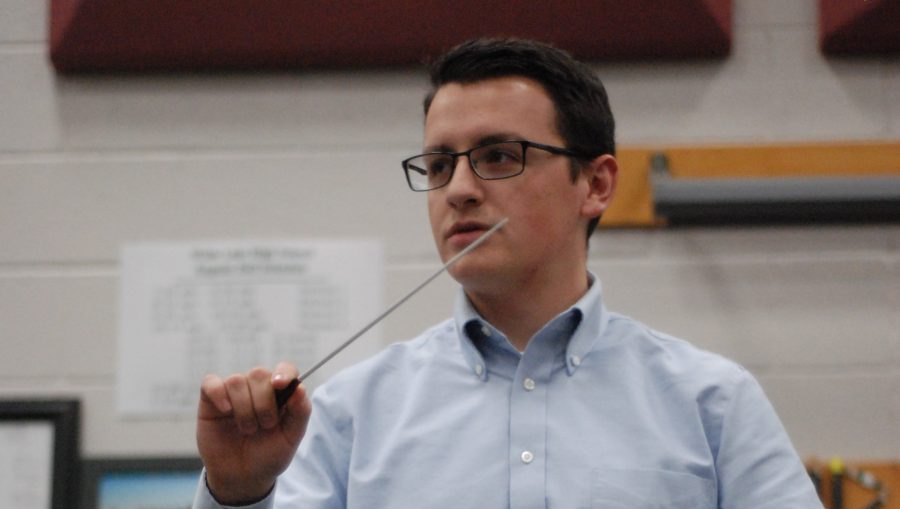 “There’s this rush about it,” said student-intern Mr. Meyers about his passion for music. “I really love it because I feel like I can share something that is meaningful with people.”

Mr. Meyers at Wilde Lake this fall, learning alongside band teacher Mr. Dutrow.  Mr. Dutrow’s first impression of Mr. Meyers was that, “He seemed enthusiastic, energetic, and really wanted to work hard to do a good job.”

“I started playing saxophone because I wanted to be in the jazz band in my middle school, and when I was in high school I decided to keep playing and pursue that professionally,” said Mr. Meyers.

Mr. Meyers currently attends the Peabody Conservatory in Baltimore and is seeking a degree in Music Education and Saxophone Performance.

“As for teaching and performing, you can’t do one without the other.  When you are performing, you are teaching even if you aren’t talking and saying things. I am always listening to figure out what I can do to improve as a player myself, and as a teacher. My own playing has gotten better after teaching.”

At the Lake, students recognize his expertise. “He knows what he’s talking about and you can tell that he’s experienced at playing and conducting,”  said senior Sophie Bertrand.

Mr. Meyers also performs professionally and is part of an orchestra that commissions composers to write pieces for them.  Recently, he performed a concerto written for a saxophone and a small orchestra, with Meyers as the saxophonist. His group has an upcoming album to be released that contains that song.

“Concert music is exciting. There are a lot of really beautiful moments that have been written for the saxophone.  It has such an amazing melodic sound, and that’s why I love playing the saxophone in a concert setting and as a soloist,” said Mr. Meyers.

“Music is worth it because it makes me happy. I like how music makes you feel and the experiences you can have with other people in music,” said Mr. Meyers.